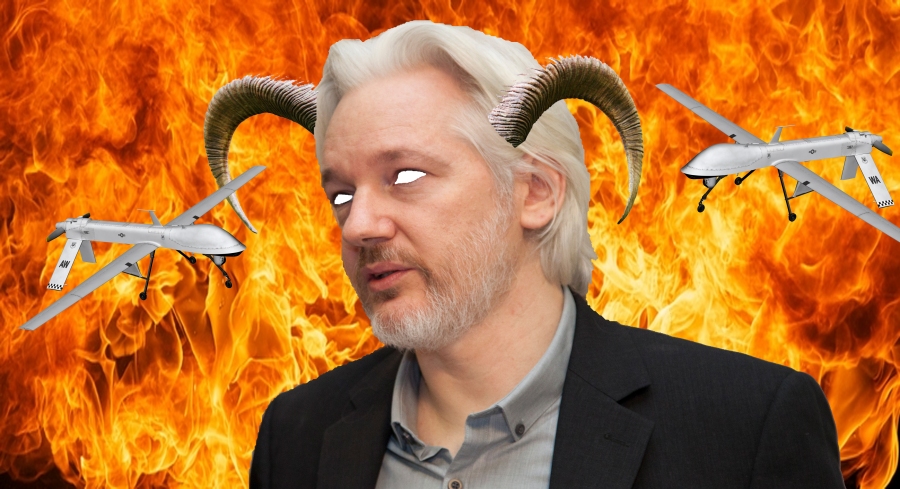 Another day, another media freakout over the alleged Wikileaks-Russian axis of hacking. On Monday, it was Marc Thiessen of the American Enterprise Institute and the Washington Post‘s turn to attack Wikileaks founder Julian Assange, who, according to Thiessen “is the devil.”

Thiessen asserts that the media is being hypocritical and irresponsible in not reporting on the newsworthy content of Democratic presidential candidate Hillary Clinton’s hacked emails published by Wikileaks. But he also writes that “Julian Assange is no friend of the United States.” Assange “heads a criminal enterprise operating out of the embassy of an anti-American government” and “belongs in a jail cell,” according to Thiessen.

This sort of heated rhetoric in the pages of one of the nation’s elite newspapers is not unexpected when it comes to Assange; the Australian programmer and publisher has been a target of attacks from establishment politicians for years — most recently relating to his alleged role as a Kremlin stooge. Another opinion piece published Monday, however, on the comparatively obscure military tech news website C4ISRNET, perhaps sheds some additional light on the Assange case and how it is viewed in certain official circles.

“The cyber realm is still struggling with basic challenges such as attribution,” writes University of Texas research fellow Jan Kallberg. “Traditional topics in political science and international relations — such as deterrence, sovereignty, borders, threshold for war and norms in cyberspace — are still under development and discussion. From a military standpoint, there is still a debate about what cyber deterrence would look like, what the actual terrain and maneuverability are like in cyberspace, and who is a cyber combatant.”

The language here — cyber combatant — is somewhat ominous, given the overblown rhetoric of media commentary such as Thiessen’s on the topic of Wikileaks and Assange, along with the widely publicized allegations that the organization or its founder are essentially complicit in Russian cyber-espionage operations, though the U.S. government has presented little evidence to back up its finger-pointing on that count. It is even more ominous, however, given some of what has been publicly said in the past by American policy makers and their allies about how they’d prefer to deal with Assange.

In 2010, Democratic strategist Bob Beckel notoriously suggested that the U.S. government “illegally shoot the son of a bitch,” pointing out that, as he put it, “a dead man can’t leak stuff.” Clinton, for her part, denied earlier this month that she ever joked about whether the government could “just drone this guy (Assange)” in 2010. “It would have been a joke, if it had been said, but I don’t recall that,” Clinton reportedly said of the alleged drone comment.

Farcical as such notions may seem to Mrs. Clinton, they have been most seriously suggested elsewhere. Commentators including a former State Department adviser and a George H.W. Bush speechwriter have openly suggested that Assange might be labeled an “enemy combatant” — the term used for American citizens, among others, that the U.S. government deems it can kill without legal due process.

Vice President Joe Biden, meanwhile, has recently talked of “sending a message” to Russian President Vladimir Putin “for attacks on the Democratic National Committee and the leaking of stolen emails,” as the New York Times put it. At the same time, Adm. Mike Rogers, head of both the National Security Agency (NSA) and U.S. Cyber Command (Cybercom), continues to advocate for splitting the two agencies, apparently due primarily to legal concerns and the government’s desire to get significantly more aggressive in waging warfare in the “cyber domain,” as Kallberg calls it.

“Knowledge is weaponized in cyber,” Kallberg concludes his Monday opinion piece. Assange may have done nothing more than spread knowledge, but given some of the U.S. government’s Orwellian legal interpretations, it is not difficult to imagine this in itself counting as an act of terrorism under one or another of the increasingly unreasonable definitions of that word that America would like to sell to the world.