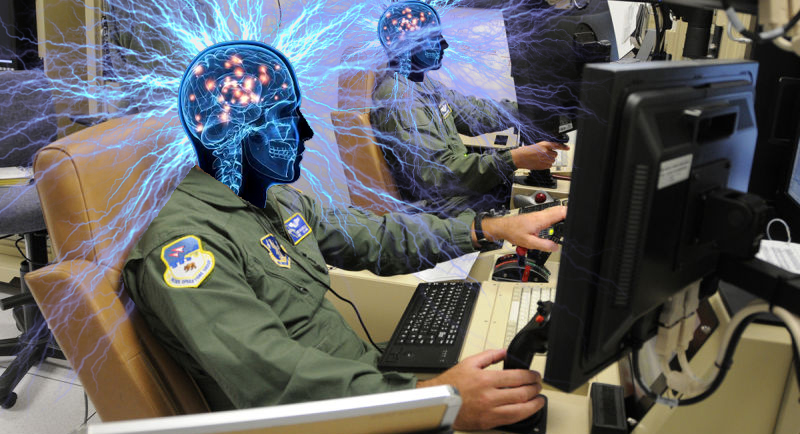 In a development that is probably enthusiastically embraced by a subsection of them, video-gamers-turned-drone-operators for the US military are apparently taking another step in the direction of melding with machines: getting their brains jolted with electricity to stay awake as an alternative to taking stimulant drugs.

Scientists working for the Defense Department have successfully “used electrical brain stimulators to enhance mental skills of staff, in research that aims to boost the performance of air crews, drone operators and others in the armed forces’ most demanding roles,” according to a report published Monday in the Guardian.

While the new methods being used are apparently somewhat experimental, the campaign to artificially augment human capabilities — and to test new technologies that sometimes aren’t very well understood on military personnel — has been ongoing for decades. The Pentagon’s effort to create the so-called “super soldier,” however, has picked up pace once again in just the last few years, since the Defense Advanced Research Projects Agency (DARPA) created a new Biological Technologies Office in 2014.

The devices now being tested on drone operators reportedly utilize electrodes to send “minor brain zaps” into the skull of the user, which “can boost cognitive ability.” Guardian science editor Ian Sample continues:

The technology is seen as a safer alternative to prescription drugs, such as modafinil and ritalin, both of which have been used off-label as performance enhancing drugs in the armed forces.

But while electrical brain stimulation appears to have no harmful side effects, some experts say its long-term safety is unknown, and raise concerns about staff being forced to use the equipment if it is approved for military operations.

One such expert quoted in the article, Neil Levy, deputy director of the Oxford Centre for Neuroethics, said he had “more serious worries about the extent to which participants can give informed consent, and whether they can opt out once it is approved for use,” than he did about the dangers of electrical brain stimulation as compared to the potential dangers of various drugs.

Indeed, while the Pentagon appears eager to immediately exploit every scientific breakthrough that it can for military purposes, there are also clearly a variety of potential problems associated with the use of many of these new technologies. People who run in the same circles with the elite military establishment understand this, of course, as evidenced by Director of National Intelligence James Clapper’s designation of another cutting-edge technology — “gene editing” — as a potential “weapon of mass destruction” earlier this year. Despite this declaration, however, some within the Defense Department appear determined to harness the new bio-engineering tool’s potential.

In an August article for Small Wars Journal, Aleksandr Miklos and Jared Stafford of Edgewood Chemical Biological Center, along with former Army Scientific Advisor for Biotechnology James Valdes, argued that “creation of super soldiers could be planned by well-placed genetic physiologic tweaks.” To their credit, they also noted that “the safety factor of genetic manipulation still needs improvement.”

“Various gene therapy testing approaches on animals has resulted in a variety of negative health effects to include death,” they wrote. They essentially concluded, however, that the pros outweigh the cons, writing that such genetic manipulation of humans for military purposes is inevitable, and recited what amounts to a wish list of super powers that they predict that gene editing could enable. “A variety of genetic engineering or ‘gene doping’ methods exist that could greatly enhance the performance of the soldier. By providing capabilities beyond what can be naturally developed through diet and training, gene manipulation has the potential to create stronger, faster, more energetic and pain resistant super soldiers.”

Earlier this year, Deputy Secretary of Defense Robert Work explained the Pentagon’s rationale for aggressively pursuing new bio-technologies — and trying them out on US soldiers — reportedly saying that “our adversaries, quite frankly, are pursuing enhanced human operations, and it scares the crap out of us, really.”

While the statement is rather vague, it seems conceivable that some of “our adversaries” may indeed be experimenting with weaponizing the most cutting-edge science and using it to augment their soldiers’ capabilities — or at least to conduct experiments that could potentially “enhance” capabilities of future soldiers, even if the pilot testers are negatively impacted. Just because this sort of activity “scares the crap out us,” though, doesn’t necessarily mean we need to imitate it. In other words: just because we can, doesn’t mean we should.