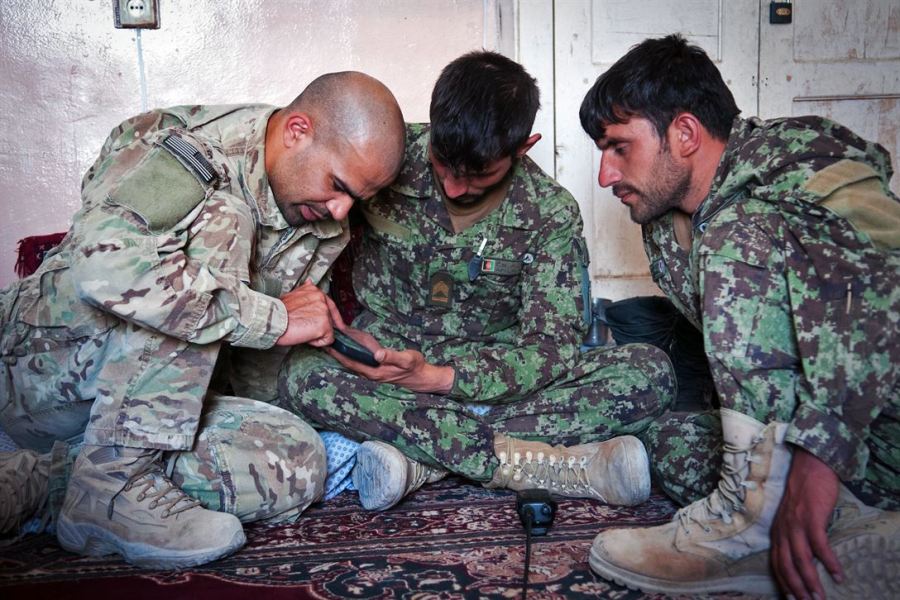 A linguist, left, shares a smartphone device with a Afghan Army command sergeant major during a security meeting at the Qara Bagh district’s center in Afghanistan’s Ghazni province, July 16, 2012. Smartphone devices are increasing in use on the battlefield in Afghanistan. Photo courtesy of U.S. Department of Defense.

In 2015, the U.S. officially ended its program to train and equip Syrians to fight against ISIS after it became clear that the effort was not working and that weapons were falling into enemy hands. Now the leader of that failed program has a new plan for ostensibly improving the outcome of similar future military operations in the Middle East — “a field-available Wikipedia-like service” for language and cultural translation.

The idea, presented by Lt. Gen Michael Nagata at a recent conference, is basically to create a phone or computer application that would function “something like a Wikipedia for special operators” as DefenseOne’s Patrick Tucker reports.

“Our deployed elements are still highly dependent on contractor translators, globally provided escorts and the like,” Nagata reportedly said. “Could these (…)  human-dependent capabilities be replaced by automated, field-available, language-translation and societal-navigation interpreters? Could we create a field-available Wikipedia-like service that is available to the individual operator without adding 70 pounds to his rucksack?”

Nagata’s suggestion is not the first call for greater automation and technologically driven solutions to translation and cultural gap problems in America’s counter-terrorism efforts. While the FBI’s Online Covert Employees have been creating fake personas and trolling potential ISIS recruits for years, for example, it has more recently been suggested that this process could be automated through the use of “Artificial Intelligence Targeting Personas.”

Even without the potential problems added by automation, however, recent American efforts to combat Islamist extremism online and dissuade the movement’s potential recruits and sympathizers — assuming that is the goal — have been mired in failure, incompetence and scandal.

“Several current and former WebOps employees cited multiple examples of civilian Arabic specialists who have little experience in counter-propaganda, cannot speak Arabic fluently and have so little understanding of Islam they are no match for the Islamic State online recruiters,” AP reports. “It’s hard to establish rapport with a potential terror recruit when — as one former worker told the AP — translators repeatedly mix up the Arabic words for ‘salad’ and ‘authority.’ That’s led to open ridicule on social media about references to the ‘Palestinian salad.'”

In his recent presentation, Nagata pointed to the private sector as perhaps the best place to begin looking for potential developers of the military-grade cross-cultural “Wikipedia” app he foresees, but also apparently acknowledged that the final product, if it is created, might not fully resemble his present vision.

“Could industry help the (Special Operations Forces) element with anticipating consequences?” Nagata reportedly asked. “Here’s what I mean by that, anticipating correctly the consequences of the operations and the activities we undertake is often the trickiest and yet in some ways the most important part of our planning efforts, whether tactical or strategic. Too often the consequences we imagine in the planning bay do not play out in real life, it’s the old adage no plan survives execution. Because the conditions we encounter in operating environment, we move into are not what we had assumed.”

Indeed, thinking there can simply be an “app for that” when it comes to bridging wide cultural and language divides between U.S. military forces and the diverse range of people they encounter in the course of America’s sprawling worldwide “counter-terror” war may be wishful thinking.

“Data doesn’t create understanding,” writes Tucker. “And that’s what both planners and operators need more of before someone dreams up another train-and-equip mission.”