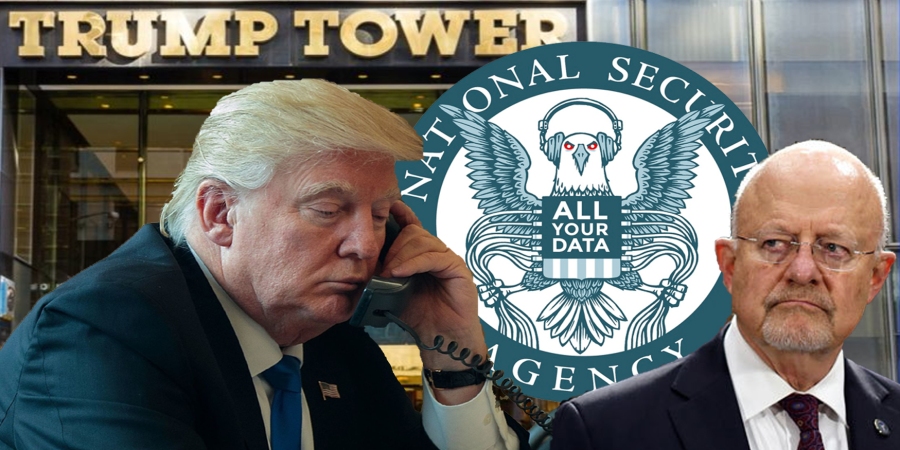 President Donald Trump kicked off yet another news cycle via Twitter this weekend with allegations that former President Barack Obama had his “wires tapped” at Trump Tower in October. Yet Trump’s concern about whether he was personally monitored  comes as his administration is reportedly looking to reauthorize two of the National Security Agency’s biggest surveillance programs, even as the NSA continues to refuse to disclose how many Americans those programs have spied on.

On Saturday, Trump sent a series of messages on Twitter alleging that Obama had ordered surveillance of his campaign. “I’d bet a good lawyer could make a great case out of the fact that President Obama was tapping my phones in October, just prior to Election!” Trump tweeted. The president’s tweets set off a minor media frenzy which continues to unfold.

On Sunday, the Washington Post reported that Trump’s allegations relied on “sketchy, anonymously sourced reports,” while the former Director of National Intelligence under Obama, James Clapper, denied that a Foreign Intelligence Surveillance Act (FISA) court order that would be necessary for the kind of surveillance Trump described had ever been issued, as far as he knew.

“For the part of the national security apparatus that I oversaw as DNI,” Clapper reportedly said, “there was no such wiretap activity mounted against the president-elect at the time, or as a candidate or against his campaign.”

“We are in the midst of a civilization-warping crisis of public trust, and the President’s allegations today demand the thorough and dispassionate attention of serious patriots,” Sen. Ben Sasse (R-Neb.) said in a statement on Twitter. “A quest for the full truth, rather than knee-jerk partisanship, must be our guide if we are going to rebuild civic trust and health.”

“Today, it became all the more clear that President Trump’s claim that he was illegally wire-tapped by President Obama was based on little more than Breitbart or other conspiracy-based news,” Schiff said in his statement. “For a President of the United States to make such an incendiary charge — and one that discredits our democracy in the eyes of the world — is as destructive as it was baseless,” he added.

The committee’s chairman, Rep. Devin Nunes (R-Calif.), meanwhile said the panel would investigate the allegations as part of its broader ongoing inquiry into Russian meddling in the 2016 election.

“One of the focus points of the House Intelligence Committee’s investigation is the U.S. government’s response to actions taken by Russian intelligence agents during the presidential campaign,” Nunes said in a statement. “As such, the Committee will make inquiries into whether the government was conducting surveillance activities on any political party’s campaign officials or surrogates, and we will continue to investigate this issue if the evidence warrants it.”

Regardless of the outcome of the committee’s investigation, however, and setting aside whether Trump’s allegations are frivolous or gravely serious (given that you could get either impression depending which media you’re consuming) much if not all of the coverage of the issue so far seems to be missing a larger point.

As Alex Emmons of the Intercept reported on Saturday, aside from the Breitbart story that may have inspired Trump’s Twitter rant getting posted, in other news last week, at a hearing of the House Judiciary Committee on Wednesday, the committee’s ranking Democrat, Rep. John Conyers (D-Mich.), revealed that the intelligence community has not responded to two letters from a bipartisan group of lawmakers asking for “simply for a rough estimate” of how many Americans’ communications are swept up in NSA programs known as PRISM and Upstream.

The two programs, which the Trump administration is reportedly looking to reauthorize, ostensibly target foreigners and only capture data on U.S. persons “incidentally,” yet once that information has been gathered “incidentally” officials can then search through their database specifically for information on Americans. And even in a classified setting, the intelligence community has for years refused to provide even a ballpark estimate of how much information or how many Americans get vacuumed up in that process.

“The members of this committee and the public at large require that estimate to engage in a meaningful debate,” Conyers reportedly said Wednesday. “We will not simply take the government’s word on the size of the so-called ‘incidental collection.’”

The NSA and its fellow alphabet soup of intelligence agencies, of course, have their ostensibly well-meaning reasons for withholding the estimate from Congress.

“The intelligence community insists that it doesn’t keep track” of how many Americans’ communications get swept up, Emmons reports, “in part because doing so would require it to identify which phone numbers and computer IP addresses belong to American citizens. April Doss, a former NSA lawyer, told the committee that it would require the NSA to de-anonymize everyone in their communications. ‘In my view, the collection and maintenance of that reference information would itself pose significant impacts to privacy,’ she said.”

Yet Elizabeth Goitein, a lawyer for the Brennan Center for Justice, pointed out at Wednesday’s hearing that the NSA already uses IP addresses to roughly assess whether a computer belongs to a U.S. citizen for other purposes, and could therefore easily estimate how many Americans’ communications it collects.

“The NSA has determined that the IP address is an accurate enough indicator of a persons status (…) to use it to filter out the wholly domestic communications that the NSA is prohibited from acquiring,” Goitein testified. “If it’s accurate enough to enable the NSA to comply with that constitutional obligation, then it’s certainly accurate enough for the estimate.”

Regardless of whether the president’s Twitter tirade about wiretaps at Trump Tower is the beginning of a real scandal being unveiled or simply an overreaction to misreported rumors, the fact remains that the U.S. government’s surveillance programs remain far too poorly understood — even by the lawmakers that supposedly oversee them. At the very least the public deserves greater transparency. A good place to start would be a basic estimate of how many Americans — aside from, perhaps, the president — have had their data vacuumed up by the NSA’s secretive dragnet spying programs.