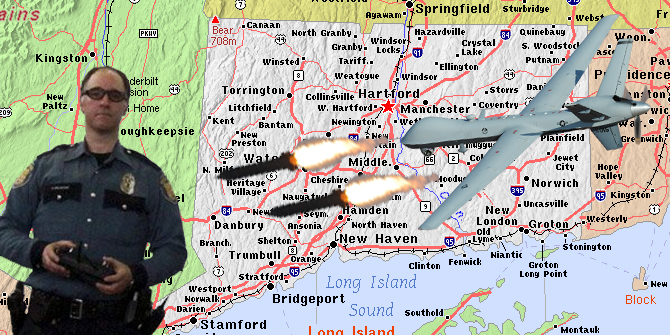 Last year, U.S. police used a robot to kill someone for the first time following a mass shooting in Dallas, Texas. Now, this disturbing trend towards automation in policing could move a step further towards normalization. A familiar piece of American foreign policy — the use of lethal weaponized drones — may become a part of U.S. domestic policing for the first time if a bill before the Connecticut state legislature passes.

The use of armed “unmanned aerial vehicles” in warfare has often been justified to the American public by citing drones’ efficiency as a cost-effective way to kill people in difficult to reach areas. Within U.S. airspace drones have also begun to proliferate, but these much smaller unarmed models have been presented to the public as something entirely different from the military’s Predators and Reapers that are capable of blowing people to bits. They’re essentially sold as toys or tools to assist with a videography hobby.

Now, however, the clear distinction between harmless quadcopters and death-dealing armed drones appears to be blurring, and not only because Islamic State militants have apparently been re-purposing hobby drones as weapons.

North Dakota already allows police to use weaponized drones “but limits the use to ‘less lethal’ weapons, including stun guns, rubber bullets and tear gas,” according to the Associated Press. A bill presently under consideration by the Connecticut legislature, however, “would ban the use of weaponized drones, but exempt police,” the AP reports. “Details on how law enforcement could use drones with weapons would be spelled out in new rules to be developed by the state Police Officer Standards and Training Council. Officers also would have to receive training before being allowed to use drones with weapons.”

While it is unclear what exactly the final rules would look like, there is concern that if the bill passes, Connecticut police may soon be using killer drones.

“I think that police are taught one thing,” Connecticut Sen. Edwin Gomes (D-Bridgeport) reportedly said. “You put a weapon in their hand, they shoot center mass, they shoot to kill. If it’s going to be used, you’re going to use it to kill somebody.”

Nevertheless, Connecticut Sen. John Kissel (R-Enfield), co-chairman of the committee that approved the bill for a vote, says that there could be effective oversight of police use of drones. “Obviously this is for very limited circumstances,” Kissel said. “We can certainly envision some incident on some campus or someplace where someone is a rogue shooter or someone was kidnapped and you try to blow out a tire.”

It’s true that the bill includes some restrictions on drone use that are supported by the American Civil Liberties Union.

“It would require police to get a warrant before using a drone, unless there are emergency circumstances or the person who is the subject of the drone use gives permission. It also would require police to report yearly on how often they use drones and why, and create new crimes and penalties for criminal use of drones, including voyeurism,” the AP reports. “Although the bill overwhelmingly passed the Judiciary Committee, several members said they just wanted to see the proposal get to the House floor for debate. They said they had concerns about police using deadly force with drones.”

The Connecticut legislature’s discussion of using lethal drones against Americans is not the first on the topic among U.S. politicians. In 2013 Sen. Rand Paul (R-Kentucky) spoke for 13 hours on his supposed opposition to targeting American citizens with drones, before shifting his position drastically to say he wouldn’t mind if a liquor store robber was killed with one, then shifting again to clarify that “armed drones should not be used in normal crime situations.” While there has yet to be a drone death of U.S. citizen within the country’s own borders, Americans have been killed in drone strikes overseas.

Just as there has been political blowback over the use of armed drones in war against targets abroad, their use by law enforcement agencies to kill American citizens can be safely expected to provoke outrage, and likely international condemnation. Weaponizing drones for use by U.S. police is a slippery slope that we should avoid going down.

Note: An earlier version of this story incorrectly stated than an 8-year-old girl and American citizen was killed in an overseas drone strike this year. She was in fact reportedly killed in a Navy SEAL raid.