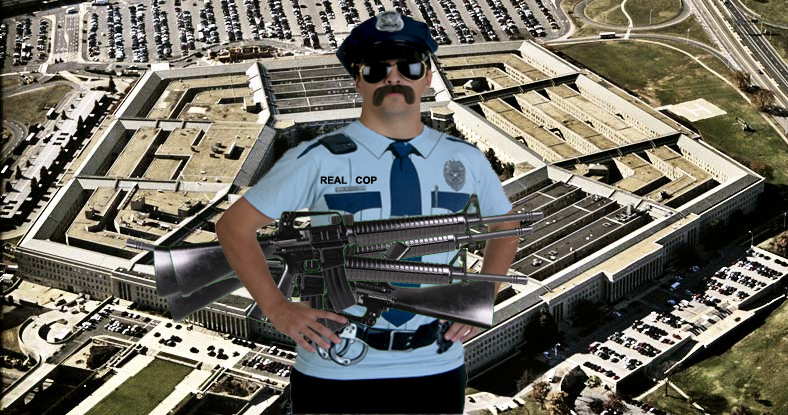 Cases of random people impersonating police officers, confusingly to many of the rest of us, are not uncommon. A recently revealed investigation, however, flips the typical script — with real federal agents posing as members of a fake federal law enforcement agency in order to obtain over a million dollars worth of military gear through a government giveaway program.

Accounting at the Pentagon has long been lax. But just how bad the situation has gotten, particularly in the area of military equipment and weaponry flowing to federal, state and local law enforcement agencies without nearly sufficient oversight through what is known as the 1033 Program, was made especially clear by last week’s revelations.

As Eli Hager notes in his article on the investigation for Wired and the Marshall Project, the Government Accountability Office is not an agency known for sting operations, but that’s exactly what it pulled off here. “The GAO created a fictitious law enforcement agency—complete with a fake website and a bogus address that traced back to an empty lot—and applied for military-grade equipment from the Department of Defense,” Hager writes. “And in less than a week, they got it.”

In response to an order last year from Congress to investigate the 1033 Program — which became widely known during 2014 protests and riots in Ferguson, Missouri, over the killing of 18-year-old Michael Brown — the GAO reportedly found a case of an illegitimate agency receiving equipment, prompting them to create their own fake agency.

Though the GAO did not release the name of its fictional law enforcement agency, the bogus organization “obtained over 100 controlled items with an estimated value of $1.2 million, including night-vision goggles, simulated rifles, and simulated pipe bombs, which could be potentially lethal items if modified with commercially available items,” it noted.

In response to the GAO investigation, the Defense Logistics Agency, which is in charge of the 1033 Program, “has taken some actions and is planning additional actions to address identified weaknesses in its excess controlled property program,” according to the GAO report. “DLA is establishing memorandums of understanding with participating federal agencies intended to, among other things, establish general terms and conditions for participation, revise its program application to require additional prospective participant information, and plans to provide additional online training for participating agencies that is expected to begin in late 2017.”

Yet the sting — apparently conducted with ease, mostly through emails, so that it was “like getting stuff off of Ebay,” according to the GAO’s Zina Merritt, who directed the operation — is another black eye for the already embattled 1033 Program.

“There just aren’t many everyday policing uses for military equipment like this,” Madhuri Grewal, senior counsel to the Constitution Project, a legal and policy advocacy group that has been closely monitoring and involved in attempts to reform the 1033 Program, told Hager. “The question is why can real law enforcement agencies get some of this stuff, let alone fake ones?”

Indeed, it’s a good question, and one that the GAO report does not necessarily address. Government investigators may have their hands full just trying to implement basic reforms and prevent fraud in a program that has been horrendously lacking in oversight. The agency’s recommendations do not include reevaluating the appropriateness of making available to domestic law enforcement any of the military-grade items that they can get through the program — or the appropriateness of the program’s existence in general, for that matter.