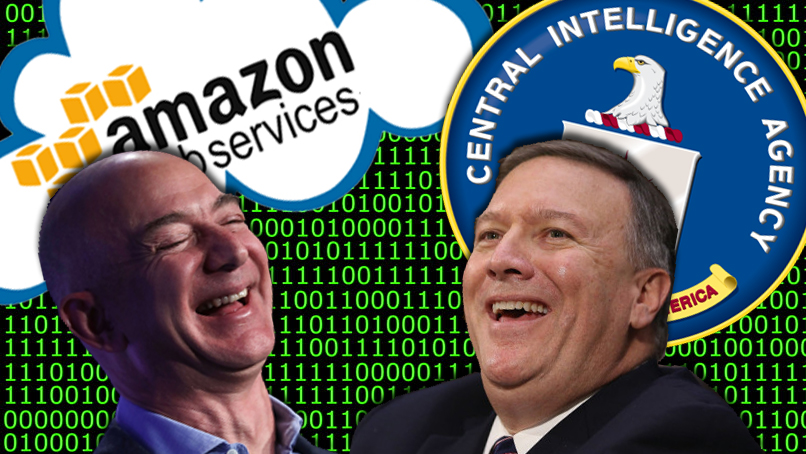 In 2013 it was revealed that the CIA was pursuing a $600 million cloud computing contract with Amazon, in what The Atlantic has described as “a radical departure from business as usual” for the “risk-averse” U.S. intelligence community (or the “leakiest in the world,” depending how you look at it).

As I and others have noted (including The Nation, in a post that mysteriously disappeared earlier this year), the timing of the deal, so close to Amazon founder and CEO Jeff Bezos’s purchase of the Washington Post for less than half that price ($250 million) raised questions about how the CIA cloud computing deal might impact the paper’s coverage — especially of topics such as Wikileaks, a former Amazon client that was dumped by the tech giant several years ago, and which has obviously been on the receiving end of much critical coverage from the Post during and after the 2016 election.

Bezos also notably holds a seat on the Defense Innovation Advisory Board, a group that advises the Pentagon and is headed by Eric Schmidt, chair of Google’s parent company Alphabet. The Pentagon is in charge of several of the intelligence agencies, such as the National Security Agency (NSA) and Defense Intelligence Agency (DIA), that will reportedly have some level of access to Amazon’s CIA cloud service.

“The AWS Secret Region is essentially its own commercial data center air-gapped—or shut off—from the rest of the internet,” Frank Konkel of NextGov writes. “CIA Chief Information Officer John Edwards views the new region as a key step in commercial cloud computing technology that has already changed the way the IC handles data and addresses cybersecurity.”

While Amazon Web Services has already been handling the government’s top secret data, “the AWS Secret Region will allow the 17 intelligence agencies to host, analyze and run applications on government data classified at the secret level,” — a level of classification that is accessible to millions more people.

“Today we mark an important milestone as we launch the AWS Secret Region,” Teresa Carlson, vice president of AWS Worldwide Public Sector, reportedly said. “AWS now provides the U.S. intelligence community a commercial cloud capability across all classification levels: unclassified, sensitive, secret and top secret. The U.S. intelligence community can now execute their missions with a common set of tools, a constant flow of the latest technology and the flexibility to rapidly scale with the mission.”

For those who stand to profit from such ventures, of course, a closer relationship between private sector tech companies and America’s defense apparatus, with its virtually unlimited supply of public funding, is a major win. For those of us who remain skeptical as to the wisdom of a continued trend towards privatization of functions vital to U.S. national security, however, perhaps not so much.