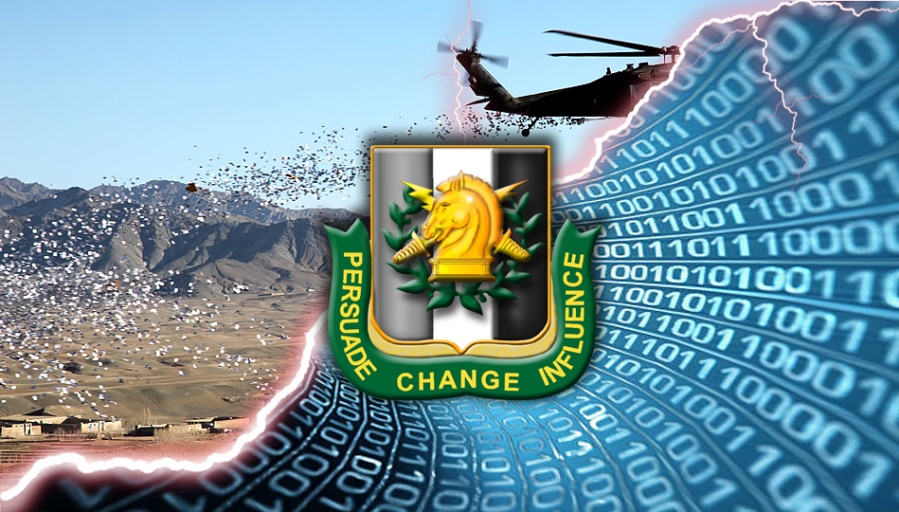 The term “information operations,” interpreted broadly, could cover anything from old-school psychological warfare like the kind of leaflet bombing schemes that have gone on since the First World War, to blocking internet access or faking the origin of a cyber attack. Recognizing this, U.S. Army planners hope to further integrate all aspects of information operations into a more “holistic picture,” according to a recent report from C4ISRnet’s Mark Pomerleau.

“The Army wants to give battlefield commanders the ability to drill down into local social media feeds and identify potential communication tools such as Wi-Fi networks and cellphone towers as a way to help slow the flow of information,” Pomerleau writes.

“The Army wants tactical cyber, electronic warfare and information operations capabilities at the tactical edge that could be used to help commanders suppress the use of adversary communication or connectivity capability prior to assaulting towns in future operating environments.”

The U.S. — along with many other countries including Russia, as we have been reminded so often since the 2016 U.S. election — has a long history of conducting psychological operations targeting audiences both domestically and around the world. Yet the importance of at least monitoring, if not engaging in such activities, operating as they often do in the shadows, seems to go through a continuous cycle of being ignored and then rediscovered by foreign policy strategists.

“Many military leaders and members of the academic community posit that, following the fall of the Berlin Wall, the United States lost much of the robust information operations-related capability it possessed during the Cold War,” Pomerleau notes.

Col. Paul “Tim” Brooks, Mission Assurance Division Chief, Department of the Army Management Office – Cyber, speaking at an event last week in Arlington, Virginia, said the Army is looking to change that, according to Pomerleau’s report.

“How do we blend information capabilities in new and different ways? How do we use MISO in combination with our cyber capabilities,” Brooks reportedly said. “We’ve got to look for new and creative ways so we can stay ahead of the dynamic environment.”

Maj. (P) Wayne A. Sanders, Branch Chief at CEMA Support to Corps and Below ARCYBER G39, reportedly gave a more detailed explanation of the shape these new efforts are taking.

“Sanders explained, depending on what the commander wants, they have started to insert IO planners within the brigade combat team tactical operations center to monitor social media,” Pomerleau writes. “They can read these feeds to see if adversaries on certain networks and facilitating malicious activity through social channels to coordinate attacks against friendly forces. An item may come out through social media, he said, that forces might want to influence, deny or degrade the adversary’s ability to get that message out using a cyber or electronic countermeasure. Or social media monitoring could be used to gauge host nation sentiments toward U.S. operations in country. If the [brigade combat team] commander had a bad engagement, he’ll want to know and monitor the response to see if maybe he needs to deploy public affairs to counter the negative messages.”

Despite extensive use of information operations by the U.S. in recent years, particularly against adversaries such as the Islamic State extremist group (a.k.a. ISIS, ISIL, or Da’esh), coverage of the extensive investigation into election interference has convinced many that other countries such as Russia outmaneuvered America and decisively took the upper hand in the propaganda field during this same same period.

“Laurie Buckhout, president and CEO of the Corvus Group and a former EW officer in the Army, said during the event that Russia looks at these capabilities as long term tools in a conflict from phase 0, or the shaping phase of a conflict, which comes before deterrence and followed by seizing, forward,” Pomerleau writes. “’I don’t think we’re there yet,’ she said, acknowledging progress and optimism in the way the Army is charting forward. The Russians, she said, look at how they can do intensive nation-oriented information operation campaigns tied very closely to a national military strategy. The U.S., in turn, has to make senior leaders embrace the concepts and get them educated on what they can do via the information environment to really start to shape elements in phase 0 on, she added.”

Yet at the same time, as the world’s highly-visible and indisputably preeminent military enforcer of the global order, even if arguably “no longer leader of the free world,” the U.S. might understandably hope to get someone else to do some of its dirty work if it’s going to be fighting according to Vladimir Putin’s rules. Maybe an agency of one of the “Five Eyes” countries, or some other cooperative government with looser rules about spying and subversion.

“Brooks explained that the Army has been wrestling with […] what their role in phase 0 is, noting allies are much more willing to act in the information environment tin [sic] phase 0 in various ways,” Pomerleau writes (emphasis added). “It is extremely important, [Brooks] said, for DoD and the Army to understand how to fight in phase 0 better and more effectively within the constraints of laws and ethics.”