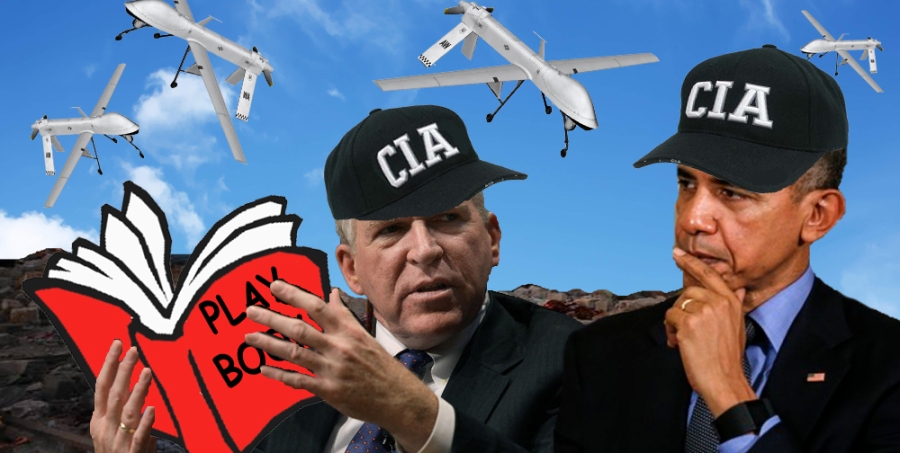 Just over a month after releasing its first numbers on drone strike deaths, including a figure of between 64 and 116 civilians killed that critics have said is vastly underestimated, the Obama administration late last week released a redacted version of its “playbook” outlining the requirements for “lethal action” against suspected terrorists, along with guidelines for their capture.

The newly published document was released in response to a lawsuit from the American Civil Liberties Union. Among the revelations in the document are that complete “certainty” that a drone strike will hit the right person and avoid civilian casualties is unnecessary to launch an attack. The document uses the phrase “near certainty” at least a dozen times, but never defines it, at least in any unredacted section.

Indeed, the document seems to raise as many questions as it answers, as much of it is redacted. One section describes a profile that must be prepared by the “nominating agency” regarding the target of a capture operation. But where the document goes on to specify what appear to be six bullet points or numbered items in a list of what should be included in this profile, the entire list is redacted. 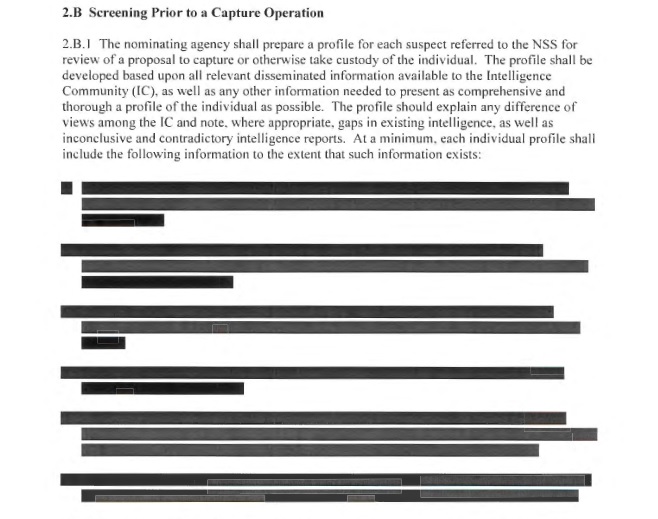 The document states that “the United States prioritizes, as a matter of policy, the capture of terrorist suspects as a preferred option over lethal action,” and thus requires a feasibility report on the possibility of capturing a terrorism suspect before it will authorize a drone strike or other lethal action.

“Absent extraordinary circumstances, direct action against an identified high-value terrorist (HVT) will be taken only when there is near certainty that the individual being targeted is in fact the lawful target and located at the place where the action will occur. Also absent extraordinary circumstances, direct action will be taken only if there is near certainty that the action can be taken without injuring or killing non-combatants,” the playbook states.

While it avoids defining its concept of near certainty, the document does explain that non-combatants “are understood to be individuals who may not be made the object of attack under the law of armed conflict.” It doesn’t include anyone, according to the document “who is targetable as part of a belligerent party to an armed conflict” or who “is taking a direct part in hostilities” or “who is targetable in the exercise of national self-defense.” In other words, it is not just high-value terrorists that the U.S. argues it can kill with impunity.

A subsequent section of the document, in fact, is titled “Policy Standard and Procedure for Approving Lethal Force Against Terrorist Targets Other Than Identified HVTs,” and the document explicitly goes to further lengths to make clear that there is some wiggle room in the process of “nominating” someone for death by Predator drone. 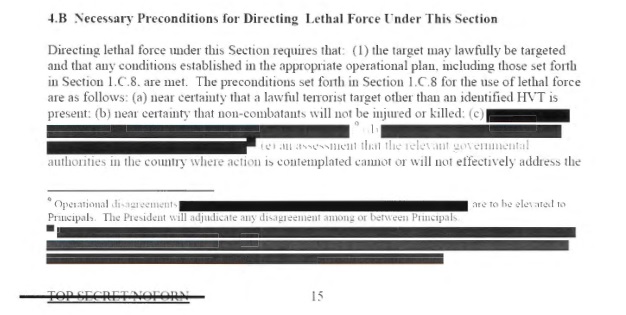 One of the last few sections of the playbook describes “Procedures for Approving Proposals that Vary from the Policy Guidance Otherwise Set Forth” in the document, and is broken into two parts. Part A is titled “Already Authorized Targets: Variations from Operational Plan Requirements When Fleeting Opportunities Arise.” Part B, meanwhile, deals with “extraordinary cases.”

“Nothing in this (document) shall be construed to prevent the President from exercising his constitutional authority as Commander in Chief and Chief Executive, as well as his statutory authority, to consider a lawful proposal from operating agencies that he authorize direct action that would fall outside of the policy guidance contained herein, including a proposal that he authorize lethal force against an individual who poses a continuing, imminent threat to another country’s persons,” it states.

This last part briefly touches on the constitutionality of these extrajudicial killings, as do a few other parts of the playbook dealing with procedures to follow if a drone strike is to target a “U.S. person” or citizen. Out of at least seven American citizens that have reportedly been killed in U.S. drone strikes only one, Anwar al-Awlaki, was specifically targeted, though several others were nonetheless suspected terrorists.

Overall, however, the tone of the Obama administration’s drone strike playbook bears less resemblance to anything written by the U.S. founders that is remembered for being admirable, or to any landmark Supreme Court decision, than it does to the so-called Torture Memos that authorized the infamous “enhanced interrogations” practiced at notorious prisons like Abu Ghraib and Guantanamo Bay, as well as secret CIA “black sites” around the world. The primary concern of the document’s author appears to be keeping himself and his bosses from serving future jail time.

Public relations concerns also make themselves apparent. “In no event will additional detainees be brought to the detention facilities at the Guantanamo Bay Naval Base,” the playbook states. President Obama famously promised on his second day in office that he would close the U.S.-operated facility in Cuba, although it seems increasingly unlikely that he will follow through.

Notably, while the document mentions exploring “third-country custody options,” it does not specify any particular alternative facility, like Guantanamo, where terror suspects might be held based on the legal argument that they pose a threat, and there may be evidence against them, but nothing that could hold up in court. “(W)herever possible and consistent with the primary objective of collecting intelligence, intelligence will be collected in a manner that allows it to be used as evidence in a criminal prosecution,” the document states.

And when it’s not possible to use the evidence you think you’ve got on a terrorist — you’ve got “near certainty” that it’s the right guy, but also that you wouldn’t be able to make a case against him in court? Well, that’s why they call it the drone strike playbook.