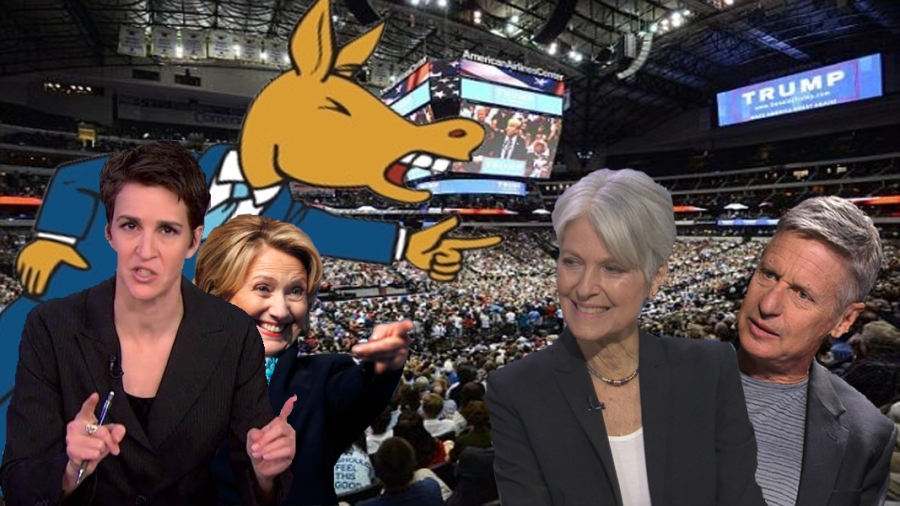 Steve Benen of MSNBC — the Democrats’ own version of their hated Fox News — writes that “in Florida, Pennsylvania, Wisconsin, and Michigan, third-party voters had an enormous, Nader-like impact – had those states gone the other way, Clinton would be president-elect today, not Trump.” MSNBC’s high priestess of the establishment left Rachel Maddow, meanwhile, scolded the handful of her viewers on election night that might dare dissent from Democratic orthodoxy, saying that “if you vote for somebody who can’t win for president, it means that you don’t care who wins for president.”

It is true that third parties had a pretty good night on Tuesday. Libertarian Gary Johnson got more than 4 million votes, which is better than any Libertarian candidate in the party’s 45-year history, and better than any candidate outside of the two major parties since Ross Perot’s runs in the 1990s. The Green Party had its best turnout since Ralph Nader’s 2000 campaign.

Yet for these marginal parties, that amounts to a little over 3 percent and about 1 percent of the popular vote, respectively. Both were polling at about three times their levels of actual turnout at various times in the months leading up to the election, with Johnson reaching double digits in some polls. That means that many who told pollsters they would vote for a third party in fact voted for one of the big two on election night. The fact that some people actually did vote for alternatives to the terrible major party choices on the ballot cannot be blamed for Clinton’s loss.

If the Democratic Party was so concerned with the nuances of things like voter turnout and poll numbers, perhaps they should have paid more attention to polls during the primaries — which MSNBC certainly knew about — that showed Bernie Sanders with a significantly greater lead over Trump than Clinton, whose advantage against Trump in the states where it mattered, as it turned out in the end, was non-existent. Instead, the Democratic National Committee conspired to sabotage Sanders because he was not as “electable” as Clinton.

The leadership of the Democratic Party plotted and schemed to elect a hopelessly corrupt candidate and she lost. The 2016 presidential election will haunt the Democrats for a long time, but those who stuck their heads in the sand and ignored the rampant corruption within their own party, expecting to win regardless because the opponent made some rude remarks, have no one but themselves to blame. Those who were outraged by what was exposed by Wikileaks as having happened during the primaries had the right response, and those who didn’t think it was a big deal misread the situation.

Yes, some people who did not like the idea of President Trump voted for third parties, rather than Hillary Clinton. But Clinton was only nominated as a result of badly miscalculated establishment Democratic Party groupthink, and the failure of her candidacy against an opponent as seemingly absurd as Trump has shattered some illusions. But those who voted for third parties didn’t share those illusions and, for the most part, probably don’t care if you blame them for Clinton’s loss.

As Libertarian Party national chair Nicholas Sarwark said on election night, “your tears are delicious and your parties will die.”

Trump himself was seen by many Republicans as residing far outside of the party’s typical ideological range, before he became its official standard-bearer this week. It is distinctly possible that third parties such as the Greens and Libertarians will become even greater forces in elections to come. By 2018, the Democratic and Republican parties may look significantly different than they do at the end of this strange year when the established class of experts seems to have gotten so much wrong and lost so much control of the narratives that are so important to it.

Alternatives to the binary two-party choice are not to blame for President Trump. For those who are serious about building a movement to keep the power of the president-elect in check, they may in fact offer better opportunities than the decaying way of doing things that is the two-party system, which has done much to show us its extensive weaknesses this year.