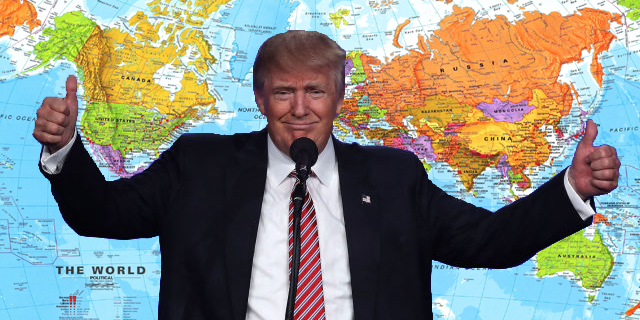 Today, Nov. 11, 2016, three days after Donald Trump’s election win, is Veterans Day. It is the 98th anniversary of the armistice that ended fighting in World War I. It marks fifteen years and two months since the terrorist attacks of September 11, 2001.

A large majority of military veterans voted for Trump, by about two to one, according to the Washington Post, which reported that some veterans interviewed prior to the election “expressed anger with the seemingly endless wars that continued from President George W. Bush’s term in office through Obama’s time in the White House and Clinton’s tenure as secretary of state.”

The US intelligence community, meanwhile, reportedly remains more wary of Trump, particularly with regard to his inconsistency when it comes to foreign policy. Trump has expressed views ranging from support for some of the most aggressive “enhanced interrogation” techniques that have been widely described as torture, to positions that have been described as “isolationist.”

Trump has also made statements on policies relating to a range of countries — from Russia to Mexico to Syria — some of which have been seemingly contradictory, and many of which have been fairly controversial. Perhaps his most believable promise has been a pledge to remain “unpredictable.” Since winning the election, though, Trump’s people have reportedly made clear to President Obama that they would not appreciate any major surprise foreign policy shifts during Obama’s last weeks in office.

Some basic changes to US foreign policy, however, might be welcomed by US veterans, and could potentially be accomplished by the Republican-controlled Congress as a way of partially reassuring a world anxious about an unpredictable President Trump.

One such change, retired US Army Col. Daniel L. Davis wrote in an article published on election day, could be to debate the merits of US involvement in various ongoing conflicts in Congress. This could be a way of rebuilding trust among a US populace emerging from a bruising election that has left about half the country, at least, feeling that they will soon be unrepresented and disenfranchised for the next four years.

Congress’ refusal to debate the value of US involvement in these wars “has been a political embarrassment for most of the past 15 years,” Davis wrote. “The Legislature’s inaction has de facto handed almost unlimited power to the Executive branch to start, expand, or broaden the scope of wars at its pleasure. This devolution has already garnered negative consequences for the nation. Recent events threaten to deepen the cost.”

Of course, it’s not only Americans who would like to see changes of various kinds to American foreign policy. On the subject of the ongoing and longstanding US presence in Afghanistan, for example, aside from calls for a strategic shift from Western policy wonks, the Taliban has also seized on Trump’s victory to call for a total US withdrawal.

Obviously the US tends to take such demands from groups like the Taliban with a grain or more of salt. A group such as the Taliban understands this, of course, and such demands as it has recently expressed to Trump might be seen as little more than taunts. As with so many things when it comes to our newly elected and unpredictable President-elect Trump, however, it remains to be seen how he will ultimately respond to these sorts of minor provocations.

Whatever form Trump’s foreign policy ends up taking, one thing that can be counted on is that America’s active duty military and veterans will feel its impact more directly than the rest of us, regardless of whether they voted for Trump or agree with him. Regardless of your opinions of Trump, or of any given aspect of US foreign policy, or the generals planning military strategy in Pentagon offices far-removed from the battlefield, the majority of the military rank-and-file who have sworn an oath to defend the US Constitution and served honorably deserve Americans’ respect on Veterans Day.